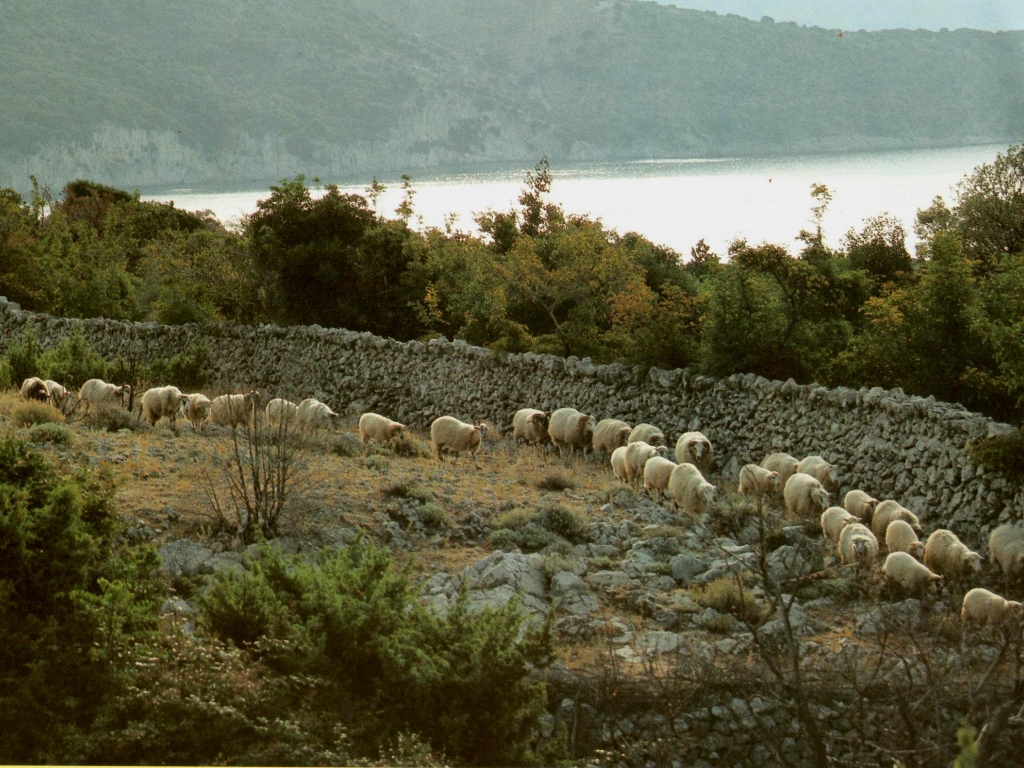 ABOUT THE ISLAND
Cres-Lošinj archipelago is the largest group of islands in the Adriatic Sea, with a surface area of 500km2, while Cres shares its title of the largest island of the Adriatic with Krk Island.

Cres Island is considered to feature the most of a karst landscape. The 45th parallel passes through the village Vodice. Its highest peaks are Gorice (648) and Sis (638). Due to its geographical position, it was already inhabited in the Stone Age, as indicated by numerous prehistoric ruins (forts and walls).
Two islands, Cres and Lošinj, were connected in the past to the mainland. With the melting of the glaciers, the sea level rose for about 90 meters.
Islands Cres and Lošinj used to be one island, but were later divided by an artificial canal in Osor. With the growth of sea trade, in order to shorten the shipping lane, the canal Kavuada was constructed. The islands were later reconnected with a moveable bridge that cars can also cross. The bridge is raised twice a day.

The archipelago’s littoral zone, especially of Lošinj Island and the south part of Cres, is very indented, full of coves and secluded beaches.
According to Greek legend, the hacked body of Apsyrt was thrown into the sea and was transformed into numerous islands and islets named Apsyrtides

These islands were the cradle of Glagolism. On their way to Istanbul, Cyril and Methodious stopped in Osor and taught the town’s monks the Glagolitic alphabet. The presence of Glagolitic monuments on the islands (Valun Plate) is, therefore, not surprising. Especially since the scribal tradition in Glagolitic script survived in Kvarner until the 19th century.

The Cres-Lošinj archipelago has about 1500 species of plants, of which some are very rare, i.e. autochthonous.
The northern region of Cres is called Tramuntana, after the wind blowing over the mountains from the north.
The forests in this part of the island are magical, full of tall centennial Mediterranean oaks, chestnuts and hornbeams. There are also a lot of karst phenomena – caves, pits, dales and ponds. For example, the Banić Cave near the Petrićevi village where the remains of a cave bear, 12000 years old, were found. In the village of Sv. Petar stands a downy oak proclaimed a culture monument in 1997. The inner part of the island is characterized by numerous pastures, olive groves and vineyards, while thick macchia, full of the yellow weaver’s broom, spreads over the west part of the island. The sub-Mediterranean climate and flora are prevalent in the southeastern part of the island. Large areas of thick bush and macchia change into forests. The whole of Cres Island is covered with shrubs of sage and immortelle.
The island vegetation is very lush in all four seasons, as flowering seasons keep exchanging.

The Cres-Lošinj archipelago is inhabited by small game such as rabbits, hares and the stone marten. There are also a lot of partridges, snipes and pheasants. Besides hawks and kites, the most important bird of prey on the island is the griffon vulture, called “Orel” by the locals, with a wingspan of up to 2.8 meters.
Since local residents still keep flocks of sheep, the most common animal on the island, the arrival of allochthonous game (fallow deer, mouflons, boars) has disturbed the ecosystem. Sheep graze freely throughout the year, making a brand of sorts out of Cres lamb and mutton. The method of sheep breeding hasn’t changed since the ancient times. Due to scant pasture, sheep migrate from one field to another, separated by dry stone walls. After the fields lie fallow for a while, they can again support sheep. Such sheep keeping enabled the survival of the griffon vulture that feeds exclusively on carrion.
It’s interesting that there are no poisonous snakes on the island, although non-poisonous snakes and lizards do exist here.
The sea which surrounds the islands is rich in fish. White fish such as the dentex, sea bass, John dory and the red scorpionfish are less common, while blue fish is prevalent. The sea abounds with various shellfish, prawns, calamari and octopi. Spear fishing competitions take place annually in Mali Lošinj. Flocks of seagulls nest by the sea.
The beautiful sea of the Cres-Lošinj archipelago is inhabited by the common bottlenose dolphin, a clear indication that our sea is unpolluted. These dolphins are today one of the best studied colonies of the Mediterranean. The research is led by the Blue World Institute.

CLIMATE
Due to the island’s geographical position in the north hemisphere, a part of the island has the subtropical-Mediterranean climate with a lot of sun, hot and dry summers and rainy autumns and winters. The average air temperature in the summer is 24° C, and sea temperature is 22°C.
Sea temperatures of the Cres-Lošinj archipelago are in autumn, winter and at the beginning of spring higher than air temperatures. The cooling effect of the sea is present just when needed – during the hottest time of the year.
Bathing season in the region lasts from the first ten days of June until the last ten days of October. Good weather conditions from March to the beginning of September are excellent for tourism, the main source of income for most of the island residents.
The most common winds are Bora (NE), Jugo (SE) and Maestral (NW).
Bora (NE) is the strongest wind of the region, relatively cold and dry, clearing up the atmosphere. Therefore, visibility is excellent after Bora, and the weather is sunny and without clouds. Bora is the strongest in the winter but also blows in the spring and autumn.
Jugo (SE) blows from the south or south-east, is of moderate strength and belongs to the group of spring and autumn winds followed by rain and humidity.
Maestral (NW) is a summer wind which brings refreshment from the open sea, and is the effect of the unequal heating of land and sea.